The authors investigated 403 stool samples of 1-year old children from ABIS cohort for developing Type 1 Diabetes (T1D), which underwent 16S rRNA sequencing. Only participants with a known Human Leukocyte Antigen (HLA) alleles were selected for the study, given that HLA was previously shown to be associated with autoimmune diseases. They divided the subjects into 4 groups according to their HLA status: high risk, increased risk, neutral risk, and decreased risk groups for developing T1D. They found that the genetic predisposition for T1D is associated with changes in the gut microbiome. The family of Saccharimonadaceae, as well as genera of Klebisella and Veillonella were found to be associated with the high risk group, while the members of Erysipelotrichaceae family were linked to the increased risk of developing T1D. Two genera of family Peptostreptococcaceae, Intestinibacter and Romboutsia, were found to play a role in neutral risk and decreased risk HLA groups. In addition, Bifidobacterium was associated with neutral risk. This paper has demonstrated the association between HLA genotype and changes in the human gut microbiome in a general population cohort, which indicates that HLA alleles are able to shape the way subjects interact with their environment. 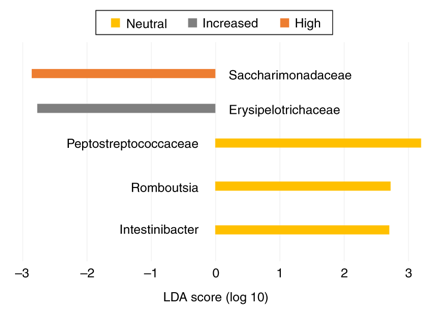 Link to the paper